This article is of Mapbox Japan Advent Calendar 2022 and translated from 🇺🇸 AWS re:Invent 2022 体験記 🇺🇸
I'm an infrastructure and data engineer working for Mapbox ads platform. I usually build infrastructure on AWS with CDK and create data APIs on EKS. In a separate article, I summarized the Mapboxer's presentations at re:Invent (in Japanese). Please take a look it. https://zenn.dev/yukinakanaka/articles/f3719f2749d348

On the way to re:Invent From the plane I could see the desert and rugged mountains, I was impressed that Las Vegas is really in the desert.

I picked up my badge at the airport. I used the QR code issued by AWS to get my badge. Note that you can also pick up your Badge at the conference venue. I was going to take a bus, but I couldn't figure out how to get in. I ended up taking an Uber 🚕. The conference ran from 8:00 am until about 6:00 pm. I had to get up early every day and was preoccupied with the conference all through the evening. The first thing that surprised me when I attended re:Invent was the size of the venue.

All of the hotels looked gorgeous, and I thought it was indeed Las Vegas!
The buses provided by AWS were used for transportation between hotels. It took about 40 minutes to go from the northernmost hotel to the southernest hotel. (The distance is not so long, but it got slower due to traffic jams.) Every day I attended one or two keynote or session, some lasting one hour, some lasting two and a half hours. Here is a brief introduction of the most interesting topic for me.

In Keynote, AWS CEO Adam Selipsky announced that AWS is investing in 'Zero-ETL futre', where Pipelines do not have to be created manually. This was Good News for me, because I has been struggling with ETL architecture lately. As a specific Zero-ETL feature, Amazon Aurora zero-ETL integration with Amazon Redshift has been announced. This feature allows Aurora data to be replicated to Redshift without a pipeline. Integration is done in the Storage Layer, where CDC Streaming reflects changes from Aurora's Storage to Redshift's Storatge. In fact now, it is possible to query Aurora from Redshift using Federated Query, but each time a query is made, a query is executed in Aurora. With this new feature, Aurora's data will be replicated to Redshift, so that queries will not be made to Aurora. I expect that performances of views using Aurora's data will be improved considerably.

This feature is still in the Preview phase. Only Amazon Aurora MySQL 3 is supported, and only us-east-1 region is supported. For more details, please refer to the AWS documentation
(AWS Releases Zero-ETL Integration of Amazon Aurora and Amazon Redshift).

At re:Invent, there were Workshops where you can learn something in practical way. I personally believe, it is important to attend as many workshops as possible at re:Invent. (Keynote and Sessions are not so important because you can look up videos and blogs after the event.)
As I mentioned at the beginning, reservations for the Workshop filled up quickly, but it was possible to attend without a reservation if you got in line for the Walk-Up. However, the early bird gets the worm, so even if you get in line, you can't be sure of getting in. I was not able to join some workshops even though I got in line 40 minutes before😭. The following is a brief introduction to the Observability workshop, which was the most informative of all the workshops I attended. In this Workshop, I learned how to improve the Observability of Microservices running on EKS. AWS Distro for OpenTelemetry, FluentBit and Data Prepper were deployed on EKS to collect data and send to AWS OpenSearch Service.

OpenSearch is a Project forked from ElasticSearch. AWS OpenSearch Service is its managed service. It provides real-time application monitoring and log analysis. Since the version OpenSearch2.4, Prometheus data can be visualized on OpenSearch as well. I thought OpenSearch was just a tool for 'text search engine', but I realized that it was a tool for a 'observerbility' as well, and its development speed is so fast.

I would definitely like to introduce OpenSearch in our products in 2023 to increase Observability of our applications.

At the Expo, there were booths of all kinds of Tech companies, from StatUp to Enterprise. I was very excited to see so many logos that I knew. When I was talking to the person in charge at the booth, he said, 'You came all the way from Japan? That's amazing!','What company do you work for?' etc. I was able to have a conversation with them and it helped to distract me from my loneliness. At the same time, I realized that I need to learn to speak English better. It was a heaven for engineers as I got free T-shirts, socks and stickers😇 The ones we got were given to our teammates as souvenirs 🙇🏻.

Breakfast and lunch were provided by the conference. Those were served in buffet style in a fairly large venue. Personally, I liked the nachos I had at Mandalay Bay! For dinner, I ate a log of burgers at a restaurant around the hotel🍔 Gordon Ramsay Burger's burgers were very tasty and impressive😋. Just be careful about the price. It cost me about 8,000 yen. 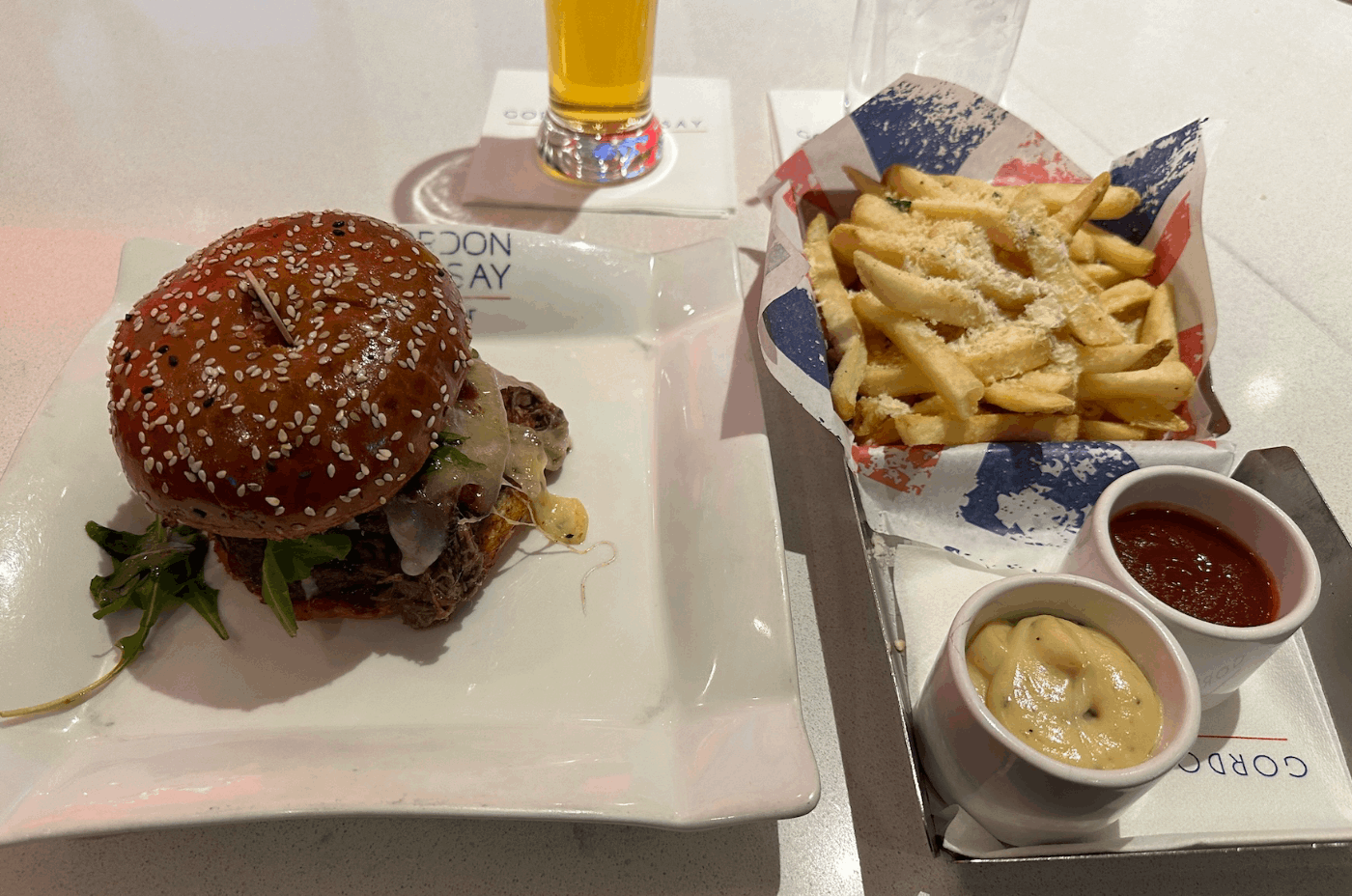 Also, companies attending re:Invent were having private parties. I was able to attend a party that AWS hosted for companies of West Cost of US. 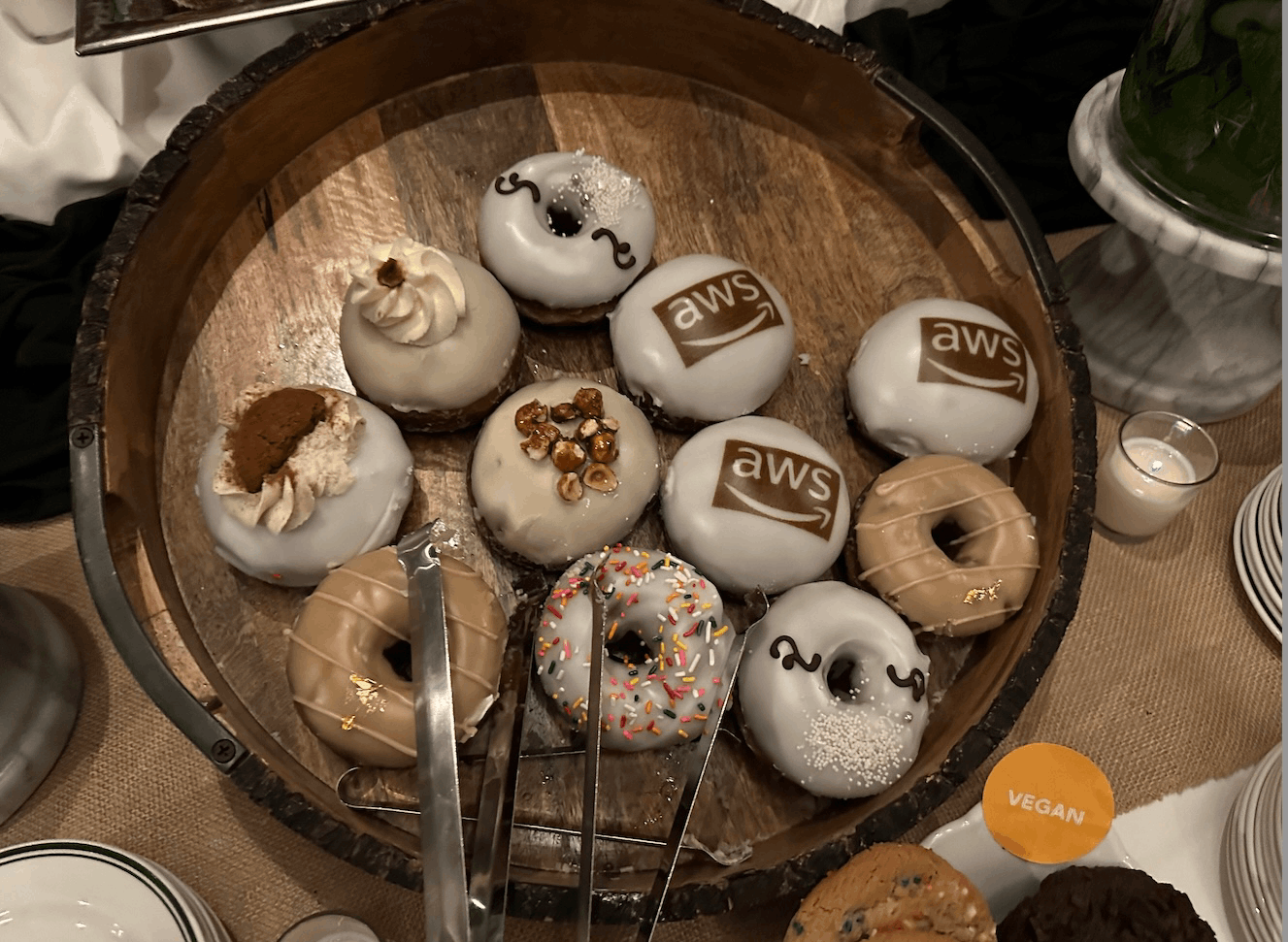 There was little time for sightseeing as the conference ran from early in the morning to late in the evening. If I could get away, I would have been able to go to the Grand Canyon, but I didn't have time for that at all, so I did some sightseeing in Las Vegas. Bellagio Fountain Water Show.
The Bellagio fountains are about a 15 minute walk from the conference venue. You can see it for free. It was a great spectacle! 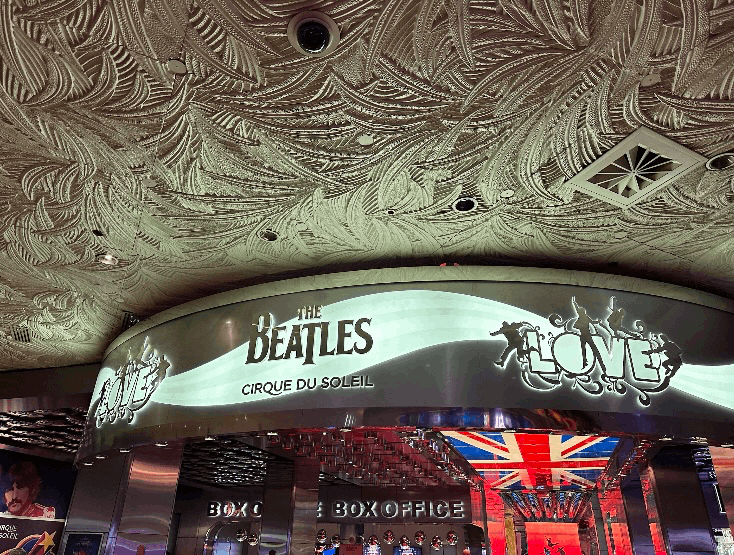 On the way back to Japan On the way back, I saw Mt. Fuji and the sunset. It was the most beautiful Mt. Fuji I have ever seen!

I will end with Good points and areas of improvement.

If you Google 're:Invent Tips', then you will find many videos and blogs. If you are going to re:Invent in the future, please check them out!

Thank you for reading to the end.